Hi! Thanks for the update!
Unfortunately, I had to turn off the sync due to the fact that high-tier posts were imported for any tier patrons.
Also, the tag filter feature would be great!

Yes, unfortunately tier info doesnt come yet. So we have to auto-lock imported posts for $1. For now you have to manually set higher tier posts to their proper tier value in post editor.

Thanks for the answer!
It’s not a big problem for me. I can place high-tier posts manually.
Just need the filter by tags to sync public posts with spoilers, etc.

Is there a way to do the opposite? I would like to publish my posts automatically to Patreon every time I write a new one.
Thanks!

Currently posts can be synced only from Patreon to WP…

Hey, Nice work getting Post syncing, I know Tags aren’t done yet but I’m wondering if there is a plan for allowing sync of posts based on pledge level? for example, If I only want my Public Posts to be synced, and not ones are some pledge levels?

Glad you liked it!

Tags will be coming in the following releases in near future. 1-2 months at most.

Currently the api does not return the pledge level of a post, so we cant differentiate in between different tiers. But when its done, such filtered importing will be possible. We may implement importing based patron only / public status in near future however. Then that can be upgraded to all tiers.

I’ll look forward to that

I have just installed the Patreon plug-in and it seems to be working just fine, thank you!

When I started syncing the first nine of my posts were added, kudos, but there are more - and for the last two hours I can see the “There is an ongoing post import” but nothing else is happening.

Is there a limit to how many posts can be imported at any given time, for example?

Also, it might be nice for future improvements to have the posts being added to Wordpress with their time stamp - that is, some posts may be weeks old, some only an hour but the syncing pulls them in one after another at point in time the syncing was asked for. I have to change their times individually afterwards which is a bit of a hassle.

Looking forward to using your plug-in, it looks fantastic!

If the post sync worked for a few posts and then stopped, there may be something preventing the cron from your WP site working or there may be some kind of ip/connection filtering. First make sure that any security plugin you have at your site is not filtering Patreon’s addresses. And you may want to ask your host whether they have any such filtering.

Importing the posts with their time may be a good idea. Ill look into that.

Looking forward to using your plug-in, it looks fantastic!

Our pleasure. If you experience any issues or have more feedback, just let us know.

Ah, I just remembered why I can’t use your plug-in - it happened the first time I added it to my blog, too:

It has started adding hundreds of copies of the images from the Patreon posts, naming them with ever growing numbers. I now have to delete hundreds of those (again) so I won’t be using your plug-in, then. 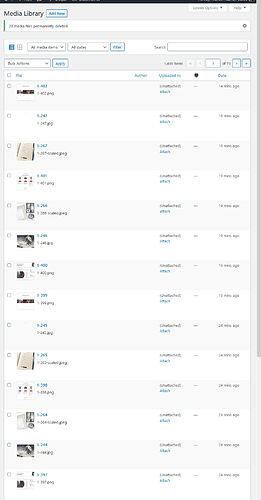 This situation would arise if the plugin is not able to detect if an image is already present in the media library. It could be caused by plugins that modify media library, the names of files, or filesystem functions. Also any filesystem situation at your host may be a cause.

This is the list of my plugins. Except for “Regenerate Thumbnails” none of those should have the access you mentioned. My hoster got back to me and said they were not aware of any issues on their part.

I’d be delighted to use your plugin as it would certainly help my Patreon plans.

There doesnt seem to be anything that would interfere with images at first look.

Today or tomorrow i will provide you a development version of the plugin with some changes. It may address your issue and arrange fluid import of your images.

Here is a working branch:

You can deactivate/delete existing Patreon Wordpress at your site, then upload and activate the above package.

This should import images orderly. Additionally there is a setting in Patreon settings to have the plugin set the featured image for imported posts.

Installed the branch, plug in seems to be working fine, thank you!

After install I started an import.

The first Patreon post was, indeed, imported. It does not have any images.

At that time I had " Set featured image from imported images" set to “yes.”

I thought, maybe it does not pull in the posts when there is no image in it so I set that to “no” and started another import.

“There is an ongoing post import” for 18 hrs now and I don’t think anything else is going to happen.

Just wanted to let you know.

I don’t mind adding the dozen posts from Patreon to WP by hand if the plug-in does everything else. Will get back if any other issues arise - or when thanking for the plug-in working just fine!

This situation you have is definitely not normal. Post import should not take a few hours, even with more than a hundred posts.

There may be an issue with the cron at your site. Cron must be working for the import to happen. This is something that you have to check yourself via cron debug plugins, it cannot be done on plugin side with PW.

Additionally, you may have some setup that processes images as they added, since you have versions of images with -scaled suffix. Indicating that a plugin or your theme is doing some image processing.

Hello. Do you have plans to allow syncing from WP to Patreon in the future? (hopefully near future). Especially with gutenberg, it’s unfortunate that I have to completely reformat each post when it’s pulled in from patreon.

Couldn’t get this working. Seems to say it’s currently syncing and not actually do anything. Though maybe it has something to do with how I set my wordpress site up.

I have a custom directory for uploads. You see the url for this page at the top how it has “.com/t/” … the upload directory for my site is similar “.com/f/” basically short for files. Trying to use this plugin seems to interfere with that and actually causes wordpress to try and default back to its original upload folder. I assume this is causing some sort of conflict.

Would there be anyway to fix this? Or would my only option be to not use a custom upload directory?

Edit: Actually, it seems I got it working, in terms of the conflict, was a problem with how I edited the wp-config.cfg. The posts do seem as if they are being added now, but not any images attached to those posts.

Edit 2: Figured I would copy the output from the health check as it does seem to be producing some errors. Not going to post all of it since it is pretty much just repeating.

Edit 3: Sorry for all the edits, but just thought of another thing to mention. I am using Total Cache. Just for the CDN capability. So I have everything in my uploads folder be delivered by my CDN. I would assume that shouldn’t be a problem, but … just in case.

Hello. Do you have plans to allow syncing from WP to Patreon in the future? (hopefully near future). Especially with gutenberg, it’s unfortunate that I have to completely reformat each post when it’s pulled in from patreon.

This is a concern that we are aware of, but currently there are no plans on the horizon for WP to Patreon sync yet.